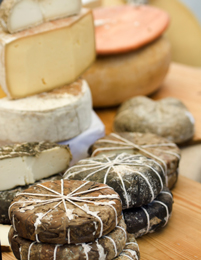 If you are an fan of imported raw milk cheeses, then you can thank Jean-Philippe Gosselin for his major efforts way back in 1966. Since he moved to Canada from France with his wife and business partner Lucie, he has been involved in the cheese business, first as a promoter, and then as a inventor, importer and distributor. With over 100 trademarks on cheese creations to date, Gosselin is constantly dreaming up new cheese creations.

Les Dependances is one of the largest importers of French and other European cheeses, selling over 20,000 kg of cheese per week throughout Quebec and Canada. True to their roots, over 70% of their imported cheeses are from France. Regular visits to France have created long-standing relationships and enabled Les Dependances to be constantly expanding their selection of cheeses. Les Dependances also ages many cheeses in their building in St-Hubert, Quebec.

As for hobbies – as you might expect – it’s all about cheese. Reading, writing, creating, and, of course, eating!

It is our passion for selling, eating and talking about great food that sets us apart.